My first ever Instructables - a PCB mockup out of cardboard

This blog post is about my first-ever Instructable entry: a PCB mockup made out of cardboard. I will explane it better:
I live in a third-world country (Brazil); as so, many of the materials have to be imported. I work with embedded systems development, so importing electronic components is basically a daily task for me. I basically buy most stuff from China and get free shipping, and it may take up to 90 days to a free-shipped material to get to my hards: this is because customs in Brazil are slow and tough at the consumer, always willing to tax us a bit more here and there.
One of the biggest slow-downs of an electronic product development is the manufacturing (and iterations necessary) of the printed circuit board (PCB), because it is almost an "art" and most designers don't make it right the first time.
So basically on a scenario where anything can take 90 days to make it to my hands from China, I cannot afford making big mistakes!; this is why I have come up with a cardboard-based mockup of my current PCB design, so that I can mechanically test it before sending it to the (PCB) board house. 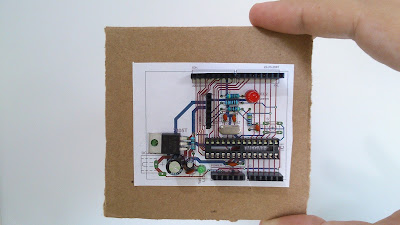 Of course (as it is simples plain paper and cardboard) you cannot connect it to and a power supply or the like; this technique is intended to mechanically-test component collision and positioning only!.
You can find my full instructable on this link. Hope you like it and share the knowledge with your friends.
Posted by ClovisF at 12:05 PM 1 comment:

Hello everyone, how are you doing today? the end of the year is approaching fast, right?

So I came here today to present you my newest venture: an embedded systems professional blog!. I just left my job at a tech company in Brazil to startup an electronics design house, and decided that in paralell I would run a blog.
One of my passions is to learn electronics, and be able to teach people what I have learned; this is exactly what I plan to do in my new FritzelLab ( <3 ), be able to pass my knowledge to everyone that wants to learn; all of that in a free and open way.

The blog will be written in Brazilian Portuguese (my mother language) because my target is the Brazilian market and its proeminent maker scene!. You can enter my blog in here: www.FritzenLab.com.br .

Feel free to comment and suggest (even in English if you will!).

See you all,
Posted by ClovisF at 2:35 PM No comments:

Good afternoon everyone, how is your weekend going so far?

Today's post is to talk about a challenge I entered: the Mouser Space Travel Challenge; it is a contest where you are asked to submit a picture (and a 100 words text) on what you would send to the moon, of something you think represents today's world. Mouser will pick two winners and send their picture and texts on a SDcard, on the first commercial mission to the moon!. My picture and text can be seen below. The links to vote on my idea are right under the picture. 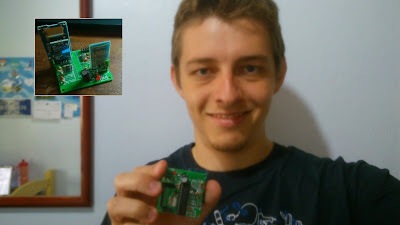 I would like to send a microcontroller-based weather station to the “Astrobotic’s MoonMail”. The reason is split in two parts: 1) monitoring the weather has always been (and will be even more) important to know and control human pollution levels (by measuring CO2 emissions) and overall global temperature rise; and 2) microcontrollers are an important part of the increasingly automated world we live in: from more efficient refrigerators to geiger counters (used to measure atomic radiation levels), everything uses microcontrollers!. Sending my weather station to the moon would make human essence eternal for ourselves.

Prizes won on giveaways and contests

Hey everyone, how are you doing today? I'm feeling great this week.

I am a very connected and active member of forums (Arduino, Arduino Brazil, ARM community), active twitter user ( @embedded_clovis ) and follower of a bunch of +Google+ channels; all those connections often lead to get to know prize posts, giveaways, contests and all kinds of social activities.
Ever since I started being more connected to technology blogs/forums/websites I have entered a bunch of contests, even winning prizes!. The very first of them was a +Freescale FRDM-K64F board (May 2014), which I won by commenting about a project idea on Freescale's Google+. I have used it to develop a weather station datalogger, which can be seen here. The board can be seen below. 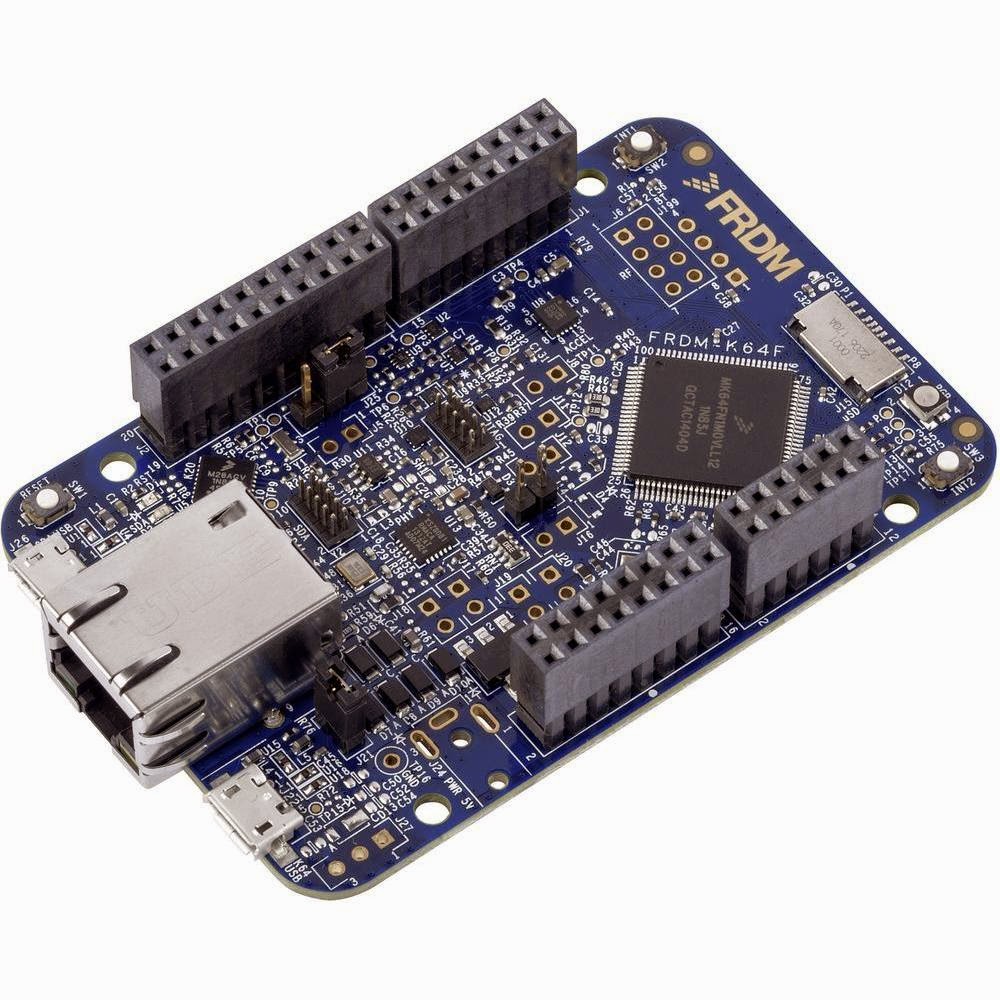 Next prize I have won (around September 2014) was a +HACKADAY Prize T-shirt, due to having my #HackadayPrize project selected to the quarterfinals. The project can be seen in this link, and the T-shirt picture is below. 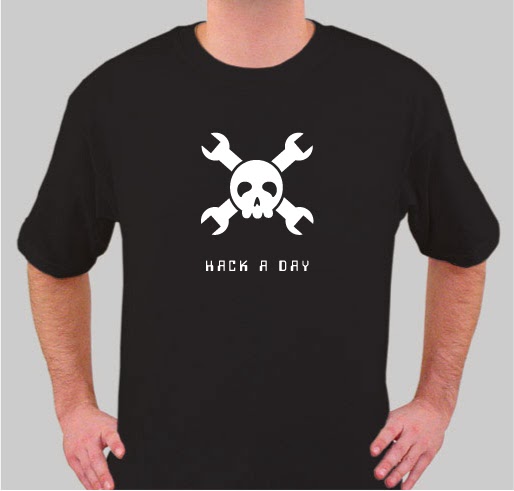 The year of 2015 started very well for me, because I have won three prizes so far: the first is the DFRobot's Bluno Beetle, an Arduino-compatible Bluetooth 4.0 board (ATMEGA328+BLE): I proposed a project idea using it, that read "A sensor node for road running (recording variables like GPS position, acelerometer and gyroscope data, temperature, humidity, altitude). My final goal is to generate a DIY road running wrist watch!". Keep tuned on this blog to get along the development of the project. 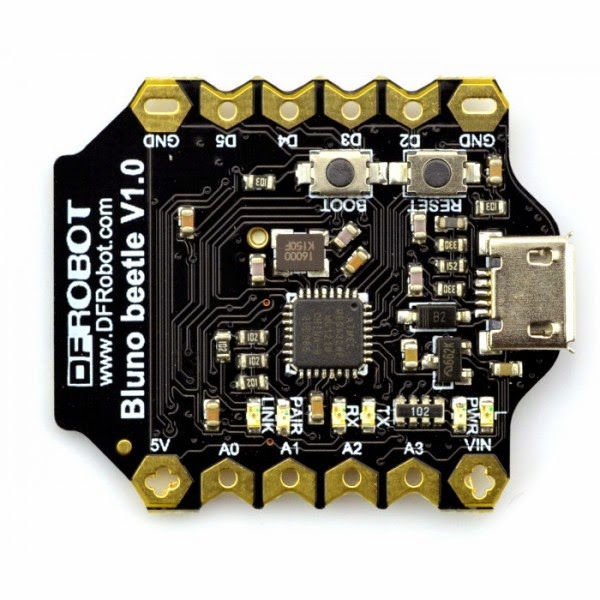 Second prize I have won so far is a NXP LPC4330-Xplorer boand, due to having subscribed to the ARM MCU desing contest, which aims to advertise the power of ARM+Keil short development cycle. The board (seen below) features a dual-core ARM Cortex-M4, making it very good for audio processing. Third prize I have won this year is a SAM4L8 Xplained Pro board, featuring an ARM Cortex-M4, on a Prize post at the ARM Embedded Community forum. I have proposed making a DAQ (data acquisition) system; stay tuned in this blog to get along the progress of development. 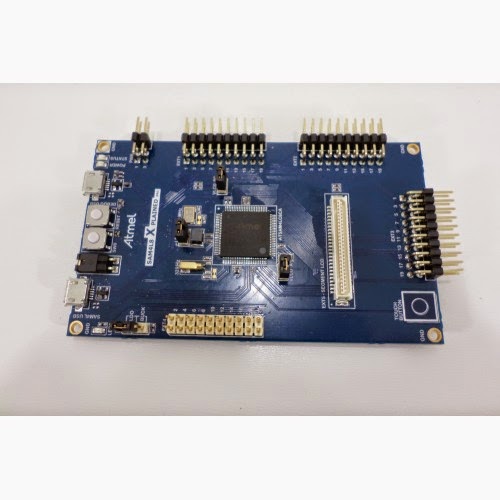 If you guys like, I also have a project on the 2015 Hackaday Prize (#2015HackadayPrize), which is an Open source weather station called FacilTempo, and can be seen here. I appreciate suggestions and critique, as well as new ideas. 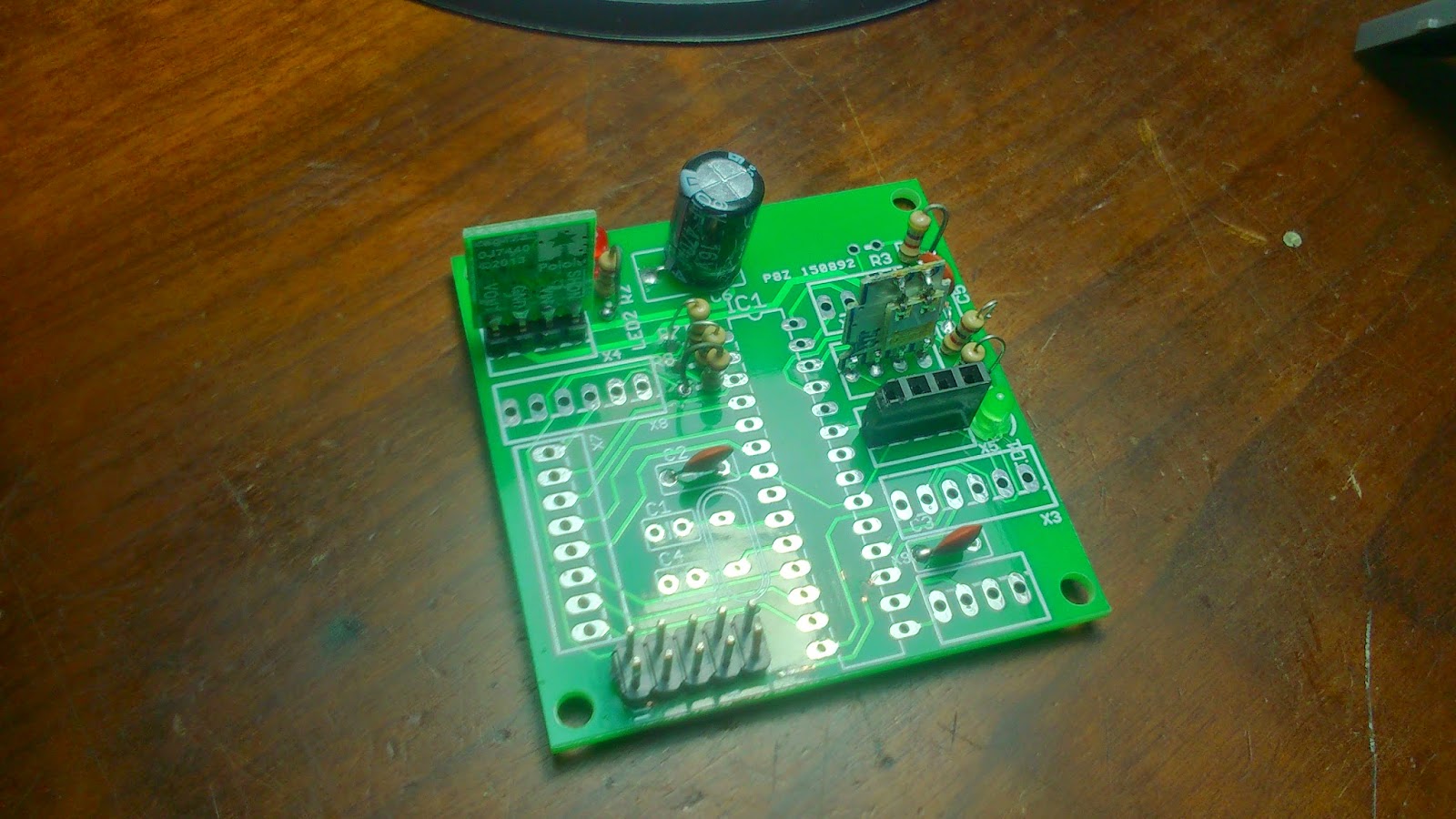 I´m here today to bring you a sort of toy I have made for the Arduino Day (March 28th, 2015). It is a simple tilt-based LED light (images below), and despite the fact that it features no Arduino (!?), it made me proud of my maker capabilities!.

The working principle is simple: depending on the  position of the tilt ball switch, the LED lights or not; you can check the schematic below. I have used the following materials:

The original idea came from my mom, which is a special children's teacher, and it intends to stimulate and entertain them, and help them learn quickly. 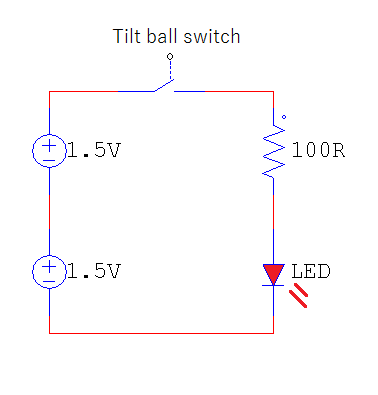 I have not tested the toy with children so far, but will be glad to share the results with you when I do. See you guys next time!.
Posted by ClovisF at 12:37 PM No comments:

Hello readers, how are you doing today?

So I´m back to this blog after some time, now to spread the word about an incredible opportunity form the Hackaday website team: today is the beginning of a new Hackaday prize, the @HackadayPrize 2015!. This is a maker competition in which you can submit your idea to change the world (or just to water your plants more efficiently..), and for which there is a go-to-space first prize.

I have entered a project in the 2014 edition, having reached the quarter-finals with mine `chip timing for running clubs´, you can see my project in here. For this year´s prize, I am planning to enter this open source weather station here, which features a bunch of sensors and communications options, all of that being supplied by a fraction-of-watt solar panel!.
By the way, the 2014 champion was a project called satNOGS, satellite tracking stations. So if you guys have any project idea and would like to share it (and maybe win a trip to space and many other perks), enter the Hackaday prize now!. See you guys soon. 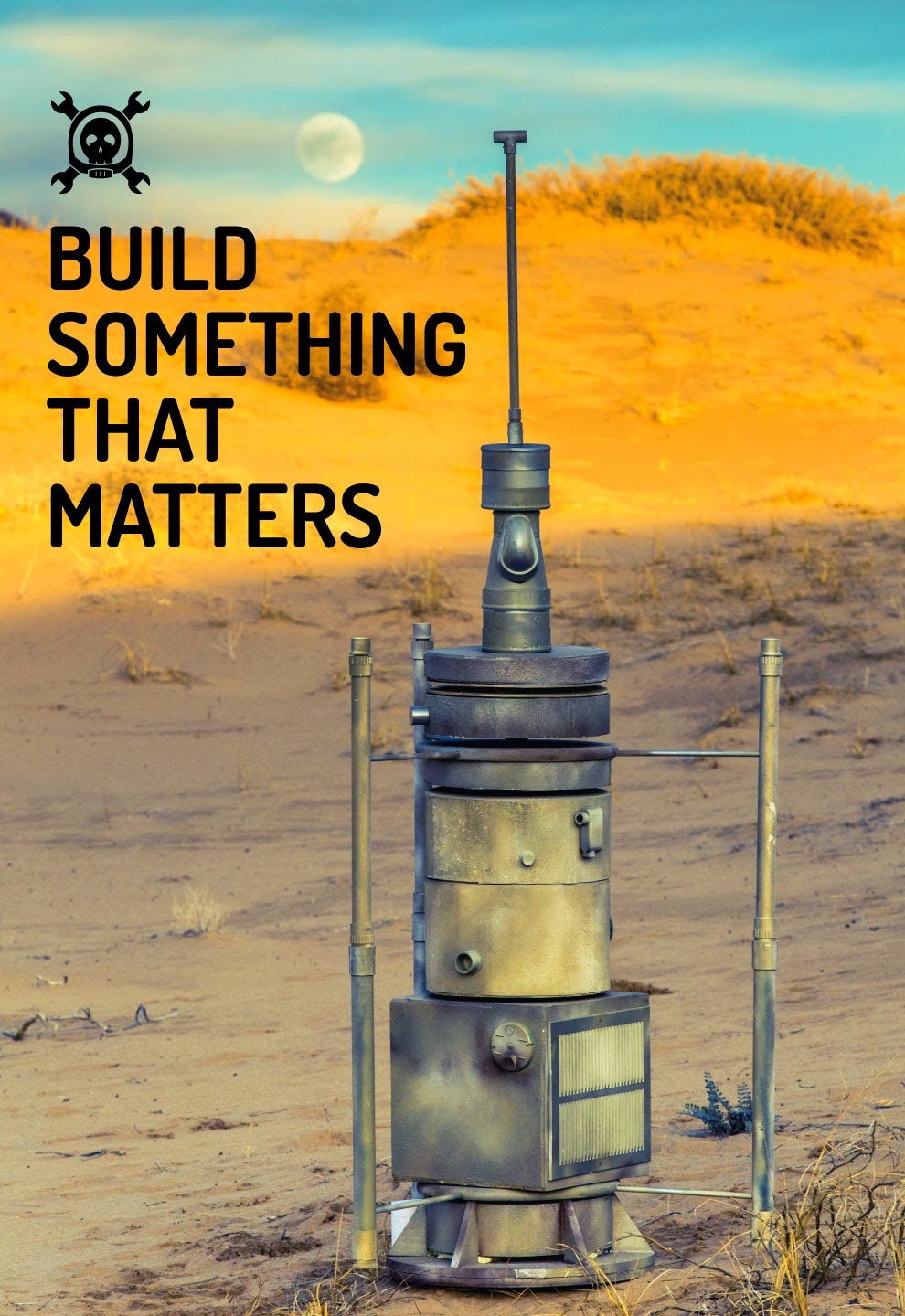 Posted by ClovisF at 7:00 AM No comments:

A bit more on Kickstarter Scams!

Hello loyal readers, how are you all doing?

In today´s post I will talk again about those free-energy Kickstarter campaigns (projects that promise free electrical energy, bla bla bla); while editing the two previous post on the same theme, I started getting more and more interested in that subject: now I even try to think and understand by myself what makes those people create a campaign to fund a fantasy-like, free-energy project!. So let the games begin.

2- Hydro Electrical stand-alone generator complex: they state "A generator complex powered by an enclosed water system that puts in motion a series of generators". Here is the link to the actual project on Kickstarter: http://kck.st/1BcC8J5 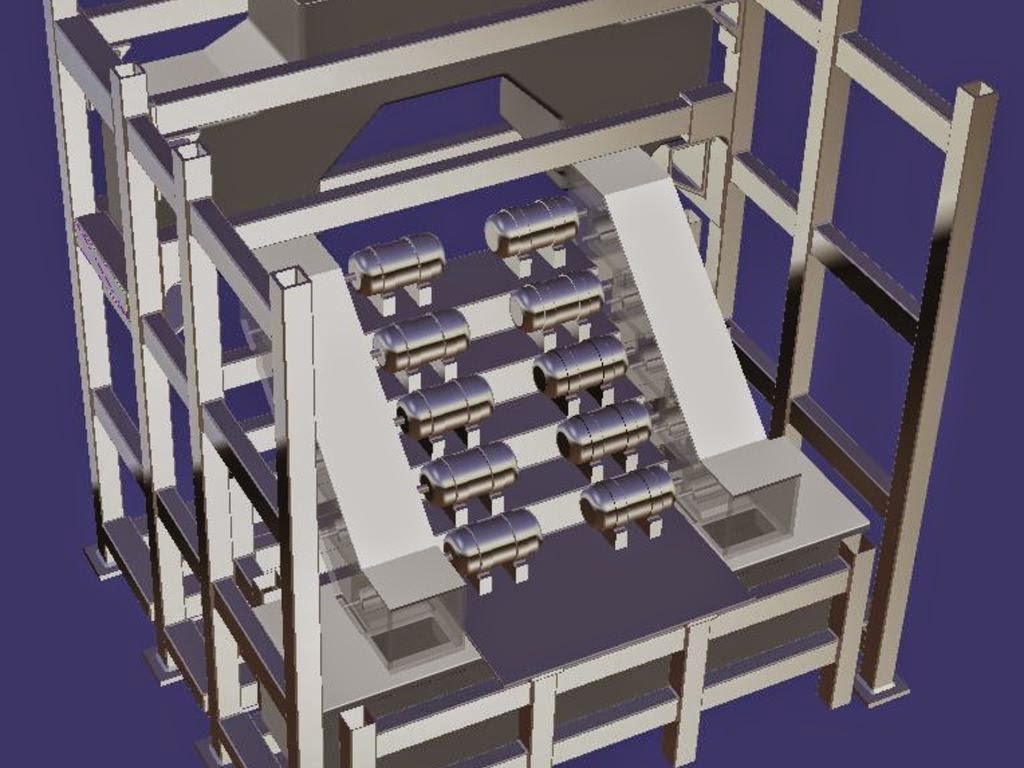 3- Quantum Energy Generator Los Angeles: they state "Liberating Humanity from Oil and Banking Cartels One Free Energy Device at a Time!". Here is the link to the actual project on Kickstarter: http://kck.st/1jxBCxe

4- Magnetic Free Energy Device Cut Down on your Bills: they state "converting Micro Electrical Frequencies into Low Voltage then Amplifying then into High Voltage that can be used to power a house". Here is the link to the actual project on Kickstarter: http://kck.st/1qY8Kr1 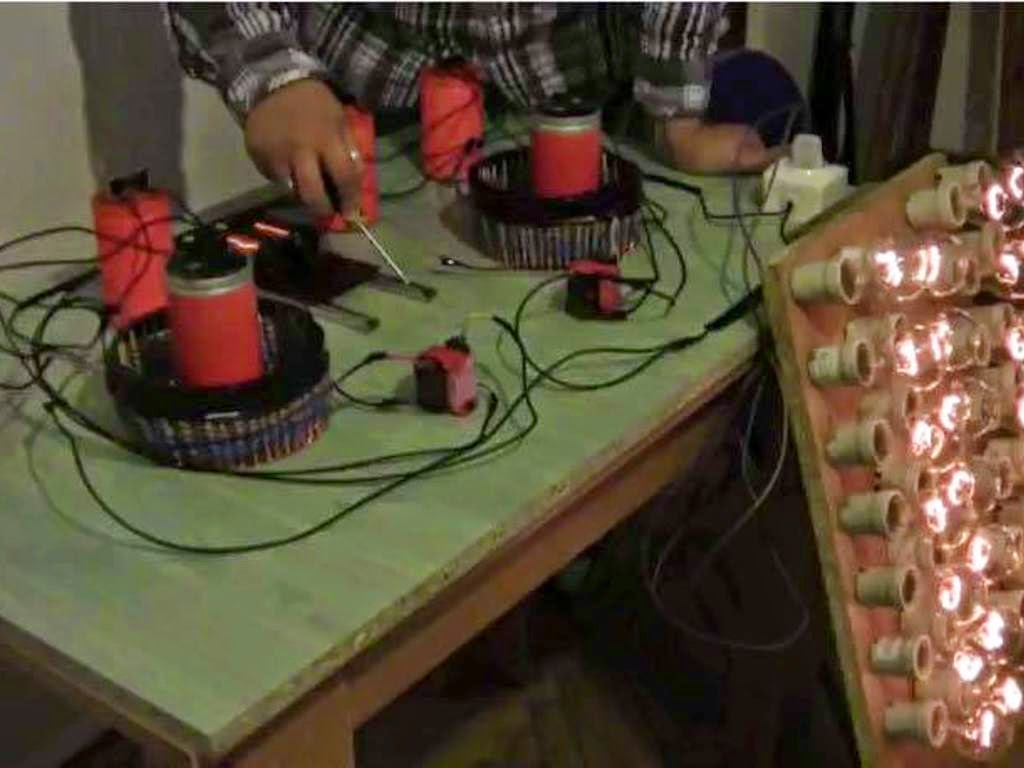 5- Bypass foil: they state "Perpetual Clean Energy from Ocean and River Currents! Your support will change the way the world produces energy. Help change the world". Here is the link to the actual project on Kickstarter: http://kck.st/15OARz3
------------------

Well, as you can see on the projects, every creator has a good intention to its creation; but none of them have taken into account the physics involved in the process of transforming one time of energy into another!; also none of them have really tested their idea, they are only asking for money to overcome the ´huge amount of money to put my idea into practice´. haha.
Posted by ClovisF at 9:29 PM No comments: